Natural language processing (NLP) is the branch of Artificial Intelligence dealing with the ability to make machines read, understand and utilize data which is in the same form as natural language of humans. It lies at the intersection of computer science, artificial intelligence and computational linguistics bridging the space between human and computer interaction.

In this data driven digital world, plethora of information is available on the internet in the form of natural language. On one hand, this information is too enormous for humans alone to process, analyze and make sense of. And on the other hand, we have computers which can process huge amounts of data in short time but not really read and understand the meaning, intent, sentiment present in the information. This is where the NLP comes into play to address this problem. 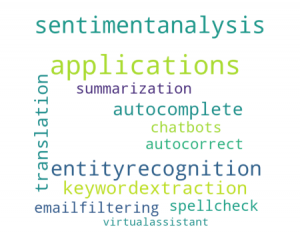 It all started with Weaver’s memorandum, the first computer-based application for translation, followed by Georgetown experiment on machine translation in 1954 wherein more than 60 Russian sentences were translated into English. With improvement in computational power and machine learning algorithms, came the statistical approaches in the early 1980s and 1990s. In the 2000s, the era of deep learning started, when neural networks began to be used for language modeling. From 2013, neural network models like Recurrent Neural Network (RNN), Convolutional Neural Network (CNN) began to be adopted in NLP. In 2015, the ‘attention’ principle was introduced in Neural machine translation models that led them to outperform sentence-based Machine translation systems. Recent breakthrough that came in the field of NLP, was the Large language models that hugely increased the capabilities of what systems can do with many downstream tasks like sentiment analysis, POS tagging, named entity recognition, summarization etc.

Natural human language has its own rules for grammar like parts of speech, sentence structuring but also irregularities such as grammar exceptions, idioms, sentence structure variations. To tackle such aspects of natural human language, NLP performs tasks like word sense disambiguation, POS tagging, named entity recognition, sentiment analysis, coreference resolution, natural language generation etc. While some of these tasks do not have direct real-world applications, they find plenty of applications when combined. Some of its many applications are:

NLP, as a field is growing in leaps and bounds leading to the expansion in its applications. With reports of staff shortage in a lot of industries, employing NLP appropriately seems to be the way forward.

New developments in the Genzai and Boosting Alpha venture portfolio